Mark and I managed to get a close encounter with a Bushmaster (Lachesis muta) in the Las Piedras River area on second of March 2016. Bushmasters are venomous pit vipers that are native to forested areas of Central and South America. They are  the longest venomous snake in America and second longest in the world after the king cobra (Ophiophagus hannah). Individuals of this species often reach 2 meters in length and have the potential to grow over 3.5 meters. The colors range from (reddish/pinkish) brown, pale brown with dark diamond-shaped markings down on the back. The amphibian & reptile research coordinator (Alberto) of Fauna Forever (non-profit organisation) was following a group of Peruvian spider monkeys (Ateles chamek) off trail when he bumped into a bushmaster. Later that day Alberto showed me the location of this beautiful viper. I was surprised how hard it was to see because it’s so well camouflaged. The bushmaster was resting underneath a pile of dead palm leaves. Out of all the snakes I’ve seen during my adventures in the Peruvian jungle, this one was definitely my favorite. After the first photo session, I decided to save the GPS location so I could return to this spot with Mark Fernley from Untamed Photography.

After dinner, Mark and I grabbed our photography gear, flashlights and an umbrella and headed out. It was quite easy to get relatively close to where the bushmaster was, due to good trail access in this area, but the last thirty-five metres or so were off trail. In this area there were a lot of fallen palm leaf piles which make finding the one that snake was under really hard, even with a GPS with a 10-20 m position error. This time the bushmaster was slightly more exposed than earlier in the day and was thus much easier to photograph. As usual we double checked the floor and shuffled the leaves to make sure it was safe enough to get flat on the floor, as there can be spines, ants, and all manner of other things that could sting or bite you. The bushmaster was so passive and showed no sign of aggression during the what-turned-out-to-be two hours that we spent with it. Due to this we managed to get some nice portrait shots, and quite a few mosquito bites too (despite the repellent we had on).

The next day, Mark and I woke up early and decided to go after breakfast for a second and final photo session. This time we had more time and natural light to get different kind of photos. The bushmaster was covered underneath two big palm leaves. With a snake hook we moved a few smaller leaves out of the way and the bushmaster did not move an inch. Our first few photos showed that the belly of the snake was massive and there were quite a few hairs around its mouth, which we had also noticed last night. It probably had eaten a rat, opossum or some other small mammal a couple of days ago, and was in the process of digesting it. It was a relative cold day for the jungle and this worked in our favor, as the snake obviously wasn’t keen to move. Mark and I took many shots with various lenses. Afterwards we slowly reconstructed the leaf mound around it and moved back towards the trail. Alberto informed us that the snake had stayed in the same place for six days before it moved on. In short, a beautiful encounter that I’d not expected because this species is incredible hard to find in the thick jungle. 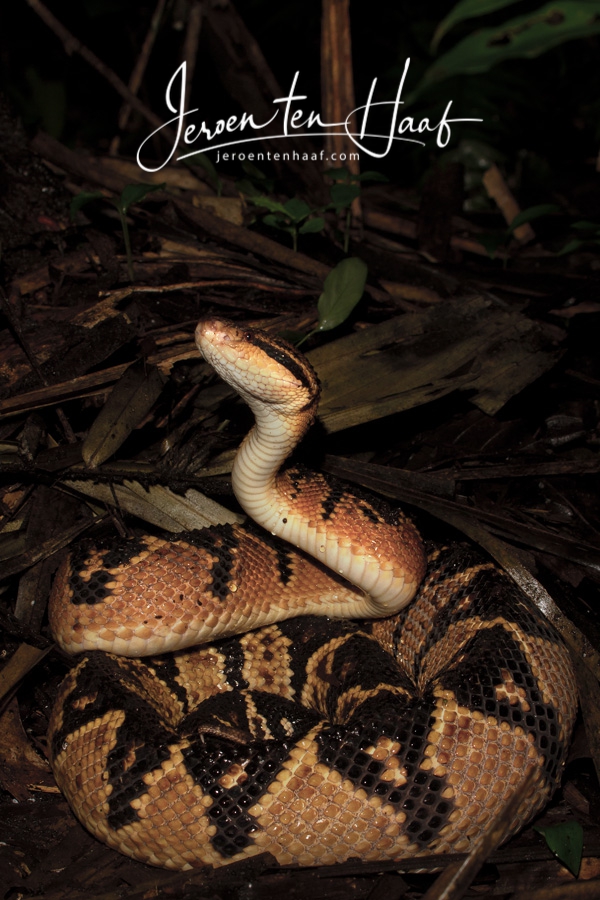 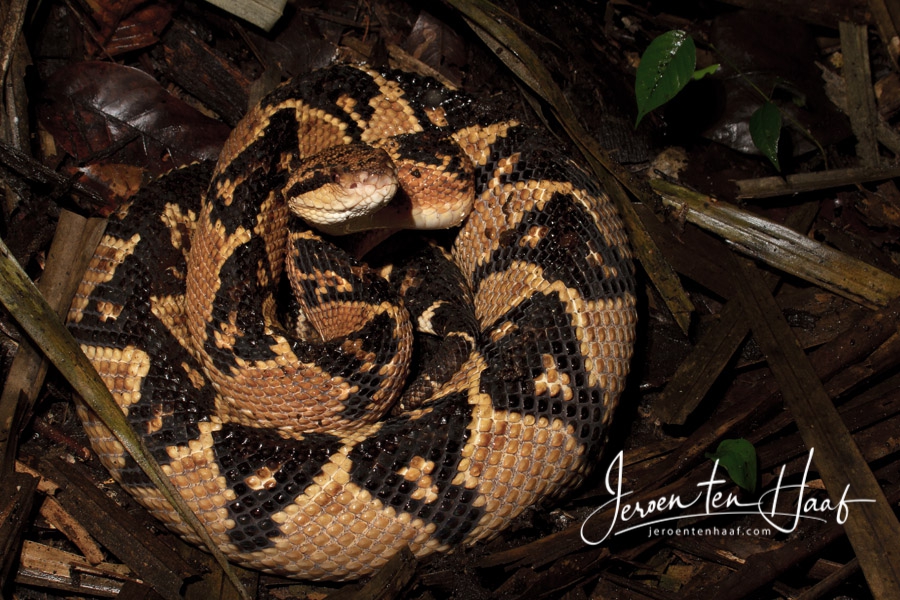 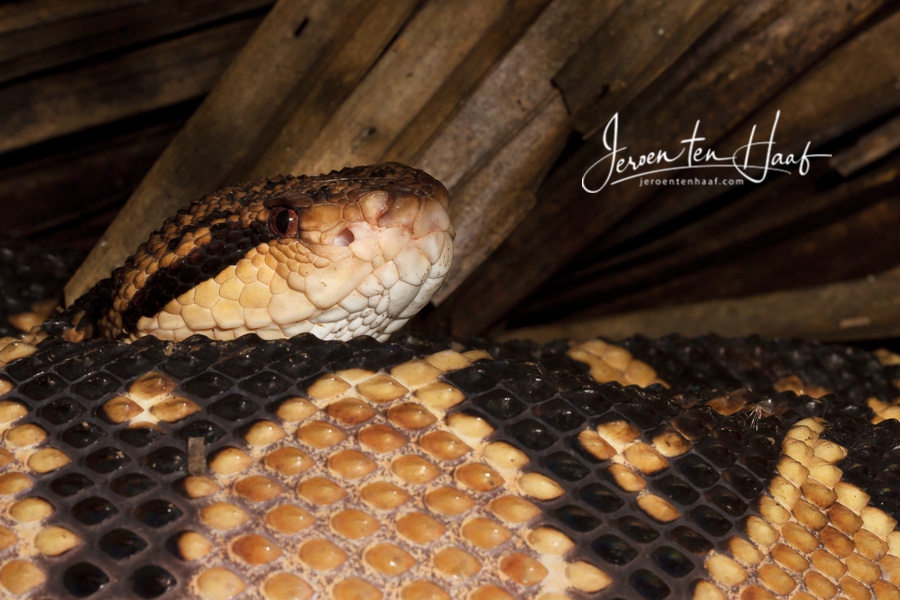