A good friend and primatologist, Liselot Lange had fantastic news earlier this year. A very small group of spider monkeys (six adults) that she studied had given birth. The newborn brings hope for the group to thrive in LPAC’S protected rainforest concession. David Johnston (Director Las Piedras Amazon Center) invited me over to document this rare occasion. Finding the group in LPAC’s 4,560-hectare of private protected area is a real challenge.

Lucky for me, I explored all LPAC’S hiking trails and research transects many times during my time at LPAC five years ago (http://jeroentenhaaf.com/las-piedras/). On top of that, I had incredible help from the current primatologist Carter Payne and the field manager Clemencia Pinasco.

Carter and I decided to get out and start walking just before the daylight crept through the jungle canopy overhead. By doing this we had a chance of finding the group before they get active for their daily routine. We returned to camp before lunch and did another survey round from roughly two PM till seven PM at night. The idea behind this was finding the tree where they sleep in, in order to get  to the same spot early the next day. This would enable us to obtain the footage that we desired. By following the group we also gathered data for Carter Payne’s research project on this exclusive species.

The first day turned out to be a great success even though it started very slow. We woke up really early and walked the LPAC hiking trails where Carter had observed the group recently. Although we did not observe the group of Peruvian spider monkeys before lunch, we did see squirrel monkeys, red howler monkeys, Saddleback tamarins, brown cappuchins, and even a white-fronted Capuchin. We also heard dusky titi monkeys calling in the distance and had an amazing sighting of a small group of white-collared peccaries! After lunch, we head out to hike the same trails again. When the sun began to set I heard a lot of noise in the canopy of the rainforest which sounded like spider monkeys. To follow the sound we had to go off-trail, but we finally managed to find the group we were looking for all day! It was great to see that all the individuals of the group wanted to play with the mother and baby which is very rare. Carter told me this species does not socialize as much as other monkey species. For twenty minutes, the group members came one by one to play with the mother and her newborn. The monkeys were at least 30 meters up in the trees which made it near impossible to get decent shots. The moment they stopped playing they disappeared in all directions. We tried to follow them, but they are so quick compared to the other species that we lost them in ‘no time’.

The second day started was a little weird because it was super ‘hot’ and we hardly found any animals. Luckily we managed to find the group at the end of the day and followed the group to their sleeping tree. To do this, we needed to run as fast as we could because they were trying to shake us off. Unfortunately, they succeeded in this quest but we came really close which means we had an excellent starting point for the next day!

On the third day Clemencia joined us since we roughly knew where they slept during the night. This time, it did not take us long before we found the group foraging to obtain energy for their activities. Not much later we saw a spectacular sighting! A tayra was hunting and stalking the mother with the baby. The group absolutely went nuts and tried to get this predator out of the tree as soon as possible. I was surprised how agile and fast the tayra was and it did not give up easily. Eventually, the spider monkeys swung towards other trees for safety, but the tayra decided to follow them. The tayra went down and ran across the rainforest floor climbed 30 meters up in the tree again for another round. This time the males of the group decided to attack the tayra which scared him away. At this point the group dispersed and we lost track of both the spider monkeys and the tayra. A while later we found the group of spider monkeys again and were amazed to find that the tayra was still tracking the group! However, the tayra was again unsuccesfull in his chase and finally gave up. The group structure was too hard to deal with. I managed to get the photographs that I wanted and even a shot of the tayra on the hunt before I had to return to Puerto Maldonado. 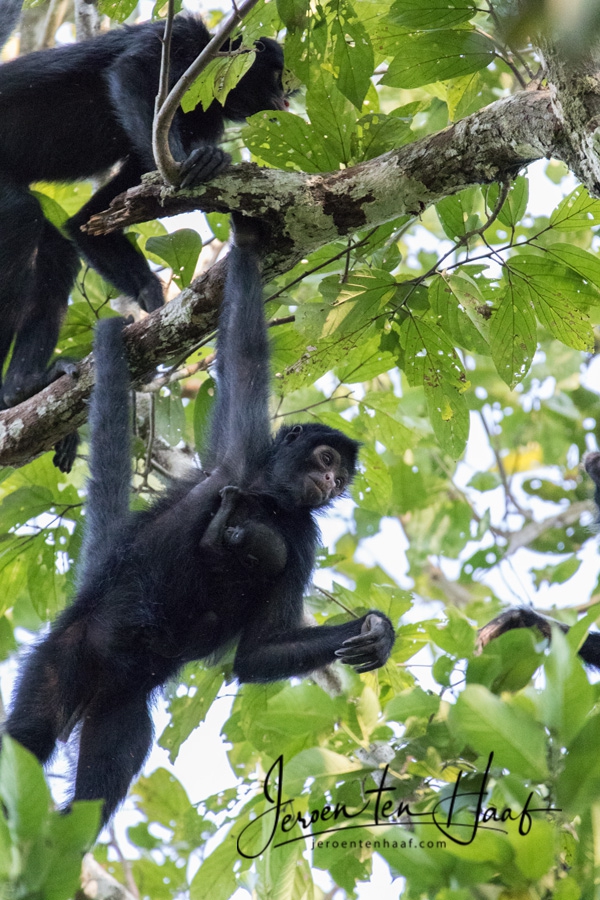 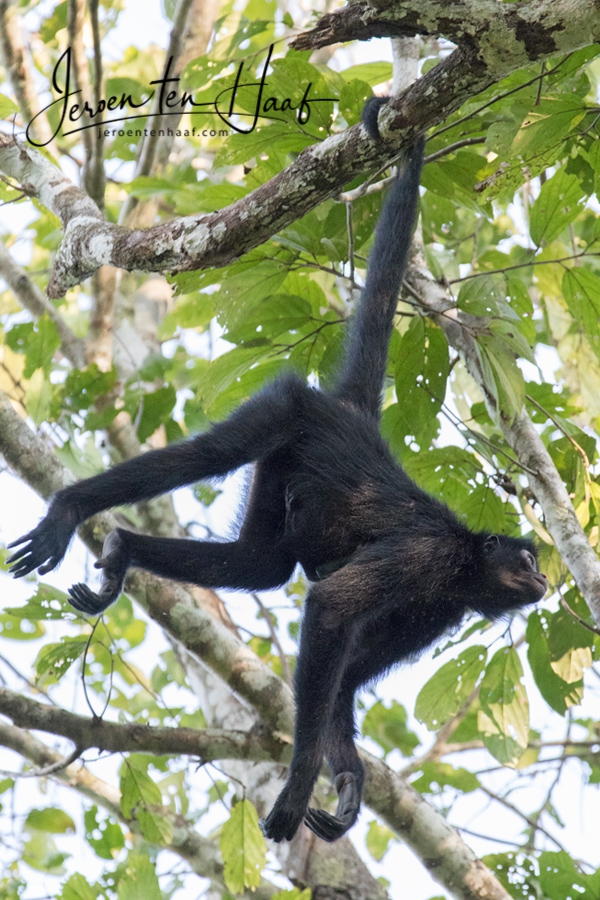 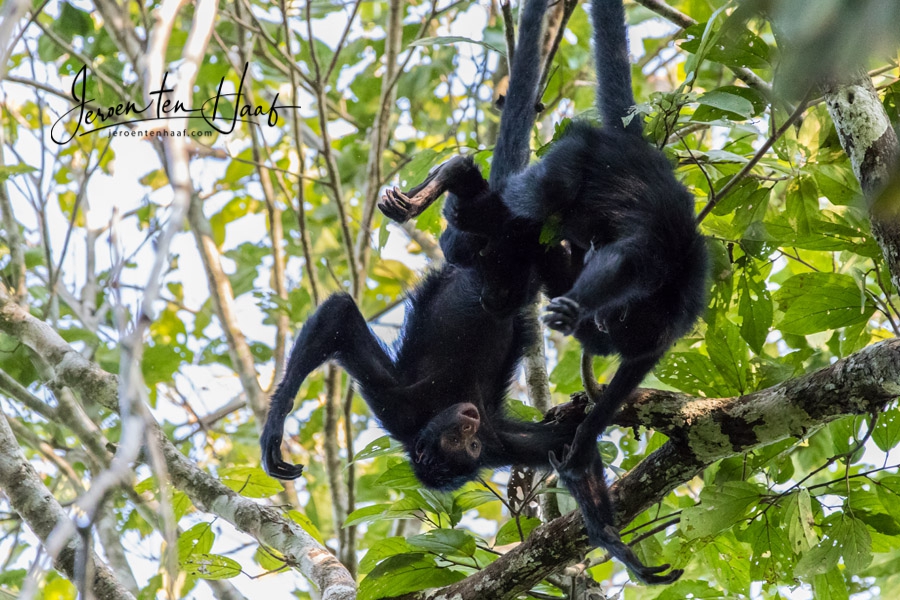 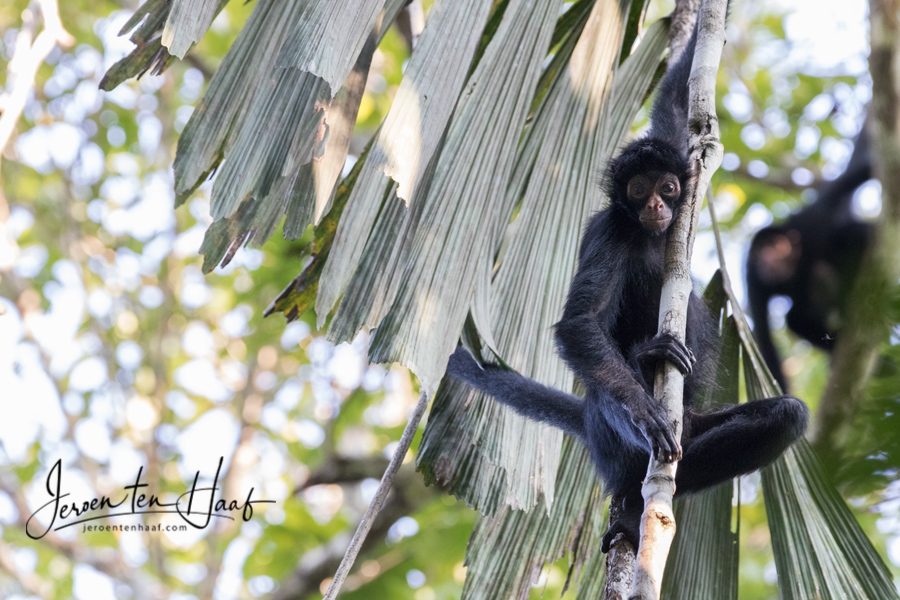 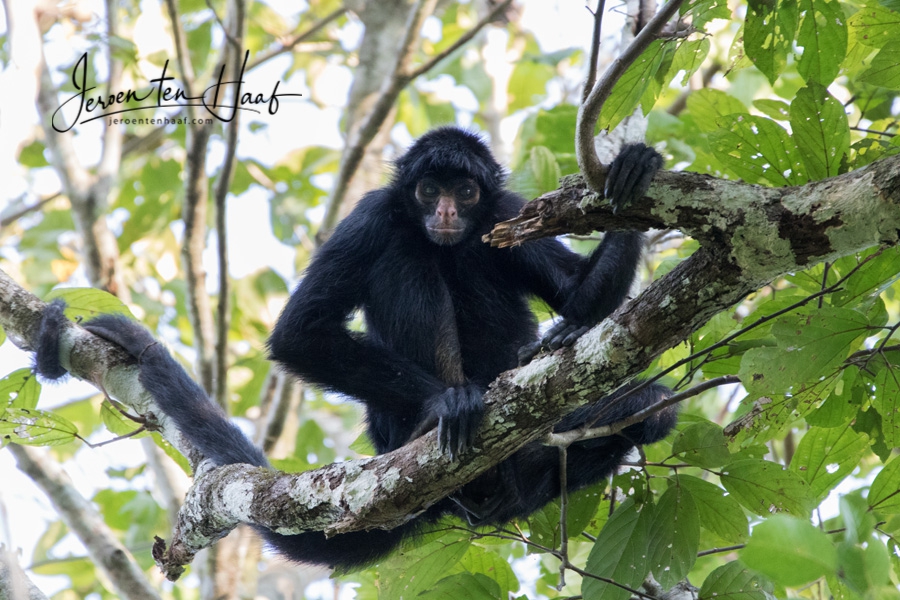