Mark, Luis and I arrived at the Las Piedras Amazone Centre (LPAC) on eight December 2015. We decided that were going to walk in the afternoon. The trail we walked is called the Big Loop and is about four kilometers long. The flora and fauna in this forest is gorgeous especially the big trees and the swampy area. After two hours of walking we saw a weird looking tree with its leaves hanging down. The moment Luis saw the tent shaped tree he told us there is a chance that a group of bats is resting underneath those leaves. We decided to approach the tree as slow and silently as possible. I remembered when I walked towards the tree I saw a few bat heads between the gaps of the leaves. Because none of us were sure how many bats were sleeping under the tree we checked them one more time. We were surprised that we found three groups of tent-making bats (Uroderma bilobatum)! In total there were eleven bats! Because it was getting darker each second we decided to come back the next day to take some photos. I’ve never seen bats grouped up like that before and I knew we could get some great shots. Before we left we made sure we had right the GPS coordinates.

Tent-making bats (Uroderma bilobatum) are medium-sized with a grey coat and a white stripe running down the middle of the back. Out of all the bats I’ve seen these little guys have the most amazing face. It’s characterized by a fleshy nose leaf and four white stripes. They are primarily frugivorous but occasionally eat insects, flower parts, pollen and nectar. They named this species from its construction behaviour of creating a tent out of large fan-shaped leaves. This roof provides an excellent shelter against heavy rains and may house multiple bats at once.

The next day Mark and I woke up early and decided to go out before breakfast. After a discussion we decided to use Mark’s camera body the Canon 70D with my Canon 100-400mm EF f4.5-5.6L IS USM. We also brought a torchlight and a ring flash with us because it’s really dark under the tree. When we arrived at the bat location it started to rain really hard. Lucky I had an umbrella with me so we quickly setup our equipment and placed it over the tripods. The umbrella was big enough for the both of us as well. After an hour the rain stopped and we moved closer towards the tree. When we approached the root there was an obvious snake smell around the area. Mark and I scouted the area, shuffled the leaves to make sure it was safe enough to lay down on the ground. We pushed ourselves backwards with our shoulders till we were under the root. During this process we got harassed by ants, mosquitos, bees and some hornets. The bats were even in a better position than the previous day because it was one cluster of eleven bats! We lay directly under the bats in the heat of the sun that appeared through the rain clouds. With Mark and myself sweating like a crazy, we finally got a good shot with all twenty two eyes of the tent-making bats! 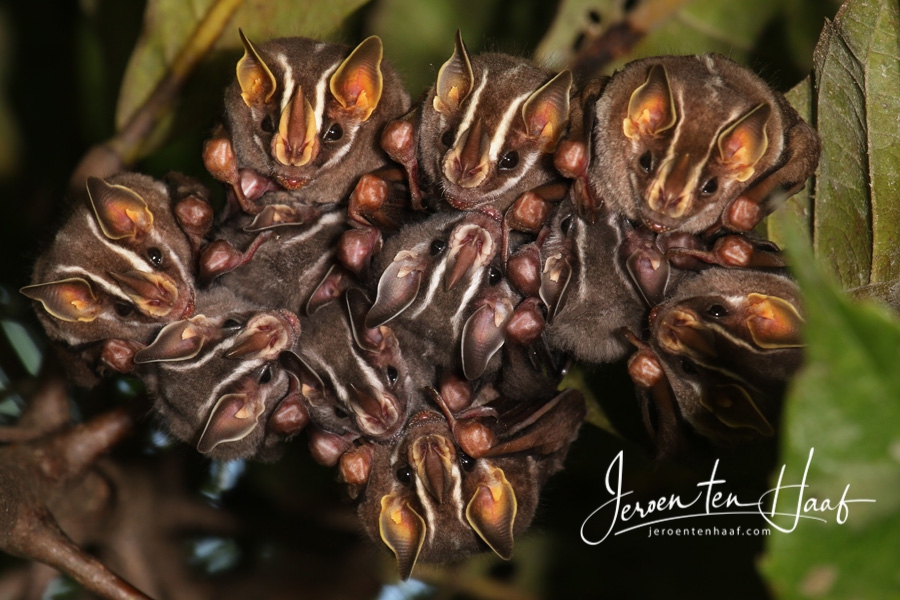