My time in the Amazon rainforest came to an end for now and my new journey began the search for the Andean condors (Vultur gryphus) in the Colca Canyon. I leave Puerto Maldonado behind me as I travel by bus to Cusco, Arequipa and eventually Chivay, a small village in the Colca Canyon. At this location I took a bus to Cabanaconde which is another village in the Andes but more to the southwest. During this trip you come across beautiful pre-Inca terraces, snow peak mountains and rural landscapes. In Cabanaconde I’m close to the ultimate condor spot in the valley, a very deep gorge of 1200 meters! The Andean condor (Vultur gryphus) can weigh up to fifteen kilograms and has an enormous wingspan up to three meters! Because of this they prefer windy areas where they can easily glide on air currents.

The Cola Canyon is an alpine area at high altitude with open (grass) plains. The deep gorge has a viewpoint  called “Cruz del Condor” where you have a real chance of spotting this bird. Early in the morning I decided to visit this viewpoint. To get my desired shots, I brought my Canon 7D, Canon 100-400mm EF f4.5-5.6L IS USM, tripod (Sirui KTV224 + E-20) and remote controller(Canon TC-80N3). With my binoculars I could see them sitting on the rocks near a steep gorge. After several hours, they decided to glide away on the air currents. In a relatively short period, they all disappeared from my sight. By now more and more people arrived to viewpoint Cruz del Condor, so I decided to return another day.

The next morning I looked over the ridge and I saw five Andean condors resting nearby! The Andean condors (Vultur gryphus) were sitting together and a little bit further away was another couple. Through my binoculars I could see that the group consisted of a male, female and three youngsters. The difference between the male and female Andrean condor was clearly visable. These birds are mostly black, but the male has a distinctive white collar around his neck and some white markings on the wings. The male also has a crest on its beak and both sexes have skin folds in their neck. When the temperature went up they jumped off the cliff to glide! To see these massive birds flying around you in the wild is a wonderful experience. Slowly they went higher and higher, but I had a great opportunity to capture the adult and juvenile males in flight. After a successful day I decided to do one more photoshoot before I returned to the Amazon rainforest in Puerto Maldonado. 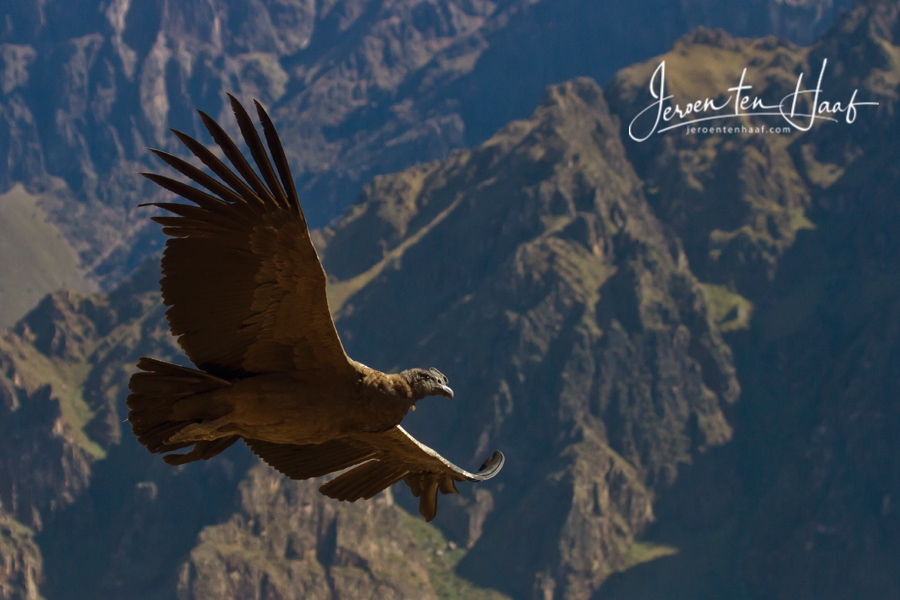